Featuring seven time zones, time can be read on the world map dial at its precise location, at a single glance 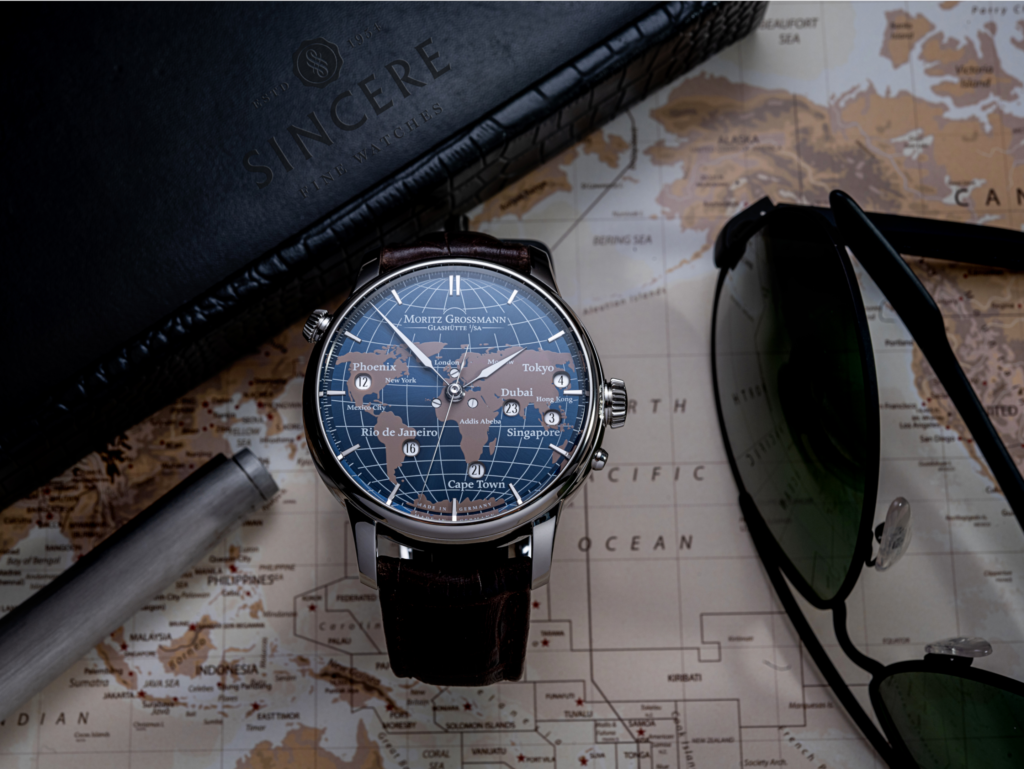 On a bitterly cold winter’s day on 23 January 1885, Moritz Grossmann, the outstanding watchmaker from Glashütte and initiator of the German School of Watchmaking (1878), catches the morning train and travels from Dresden to Leipzig. His destination – the Polytechnic Society in the Kaisersaal of Leipzig’s Central Hall. His topic – a lecture on the introduction of universal time. It was a hot topic that was only introduced less than a year earlier, in 1884. The exact title of his essay was “Universal Time and the Introduction to Civilian Life”.

The end of the 19th century saw great shifts in modern life. Inventions such as the railway and telegraphy and the advent of industrialisation gave citizens a new mobility; life became faster, the world edged ever closer together. Throughout history, people’s perception of time had been based on the sun’s path from east to west. Noon was when the sun was at its highest. Every town or city worked with its own local time. A businessman travelling from New York to Boston in the 1880s had to advance his watch by twelve minutes on arrival.

As the world drew closer together, looking at one’s own solar time was no longer enough; one had to think in more global terms. In 1884, the Canadian railway engineer, Sandford Fleming, came up with the idea of time zones – the earth was divided into 24 sectors and the same time applied within each of these sectors. The observatory in Greenwich served as the zero meridian and formed the reference longitude Greenwich Mean Time, GMT. The Coordinated Universal Time (UTC) is now the international standard time for the world. 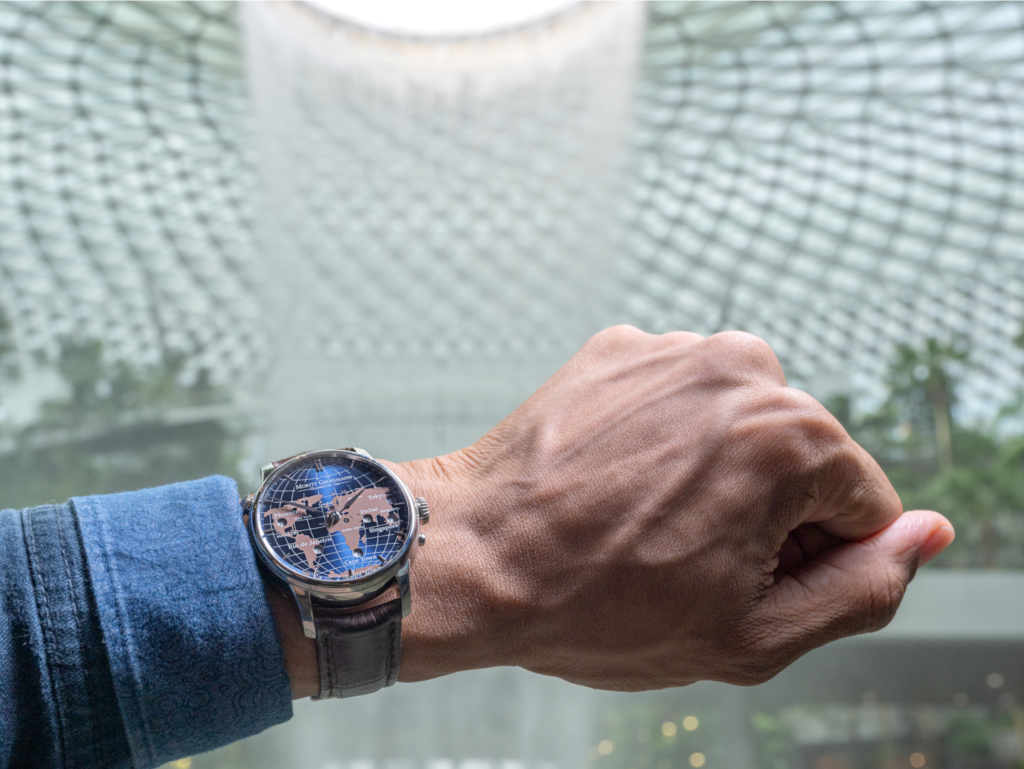 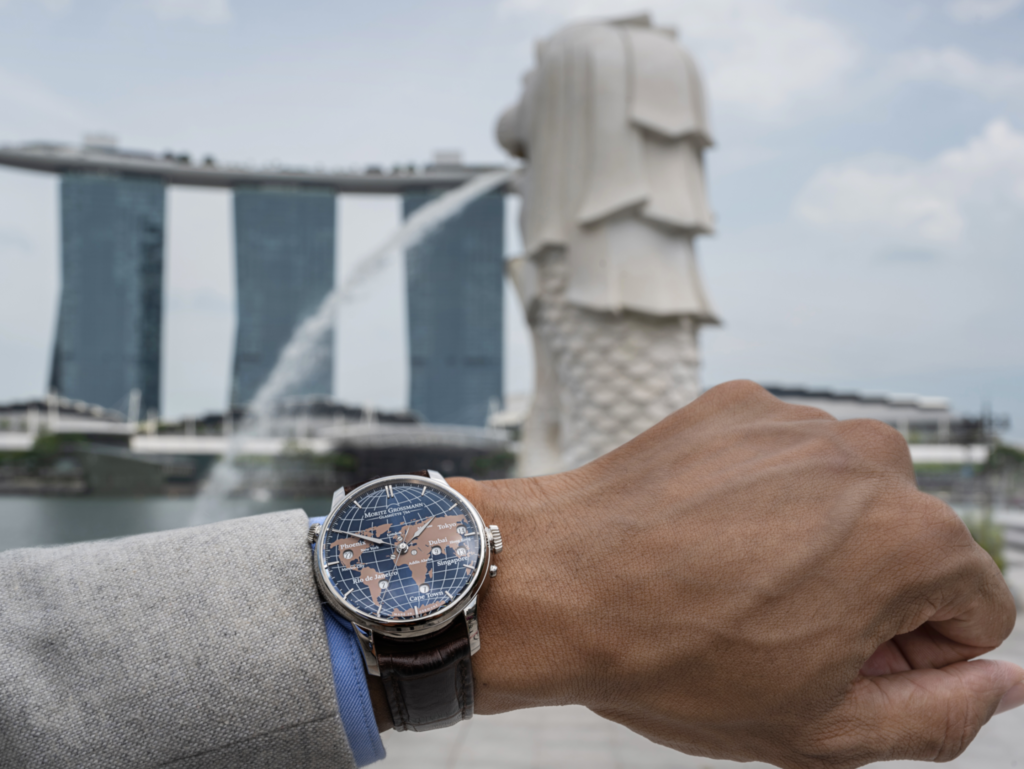 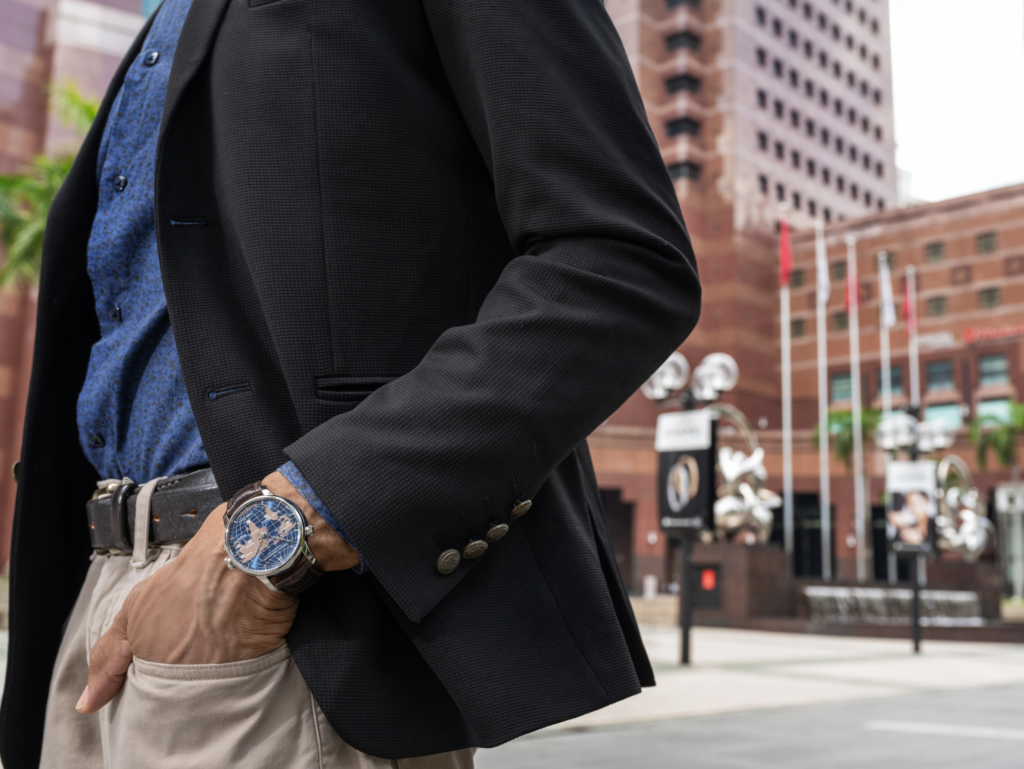 Times of the world at a glance – at the precise location, and accurate to the second

UNIVERSALZEIT, the latest model from the independent manufacturer Moritz Grossmann, makes it possible to see the current time in different time zones around the world at a single glance. Designed to depict the world map, the dial uses time windows precisely aligned with coordinates and city names as a means of providing orientation in terms of time and geography. A total of six windows displays the hour from 1 to 24 in each of the six cities. Daylight-saving time is not observed in the cities selected, and thus, the UNIVERSALZEIT indicates the actual time all year round with no adjustment necessary. The hours of the main time are displayed by the manually crafted hour hand. The minutes and seconds are indexed for all time zones via the minute and second hands. 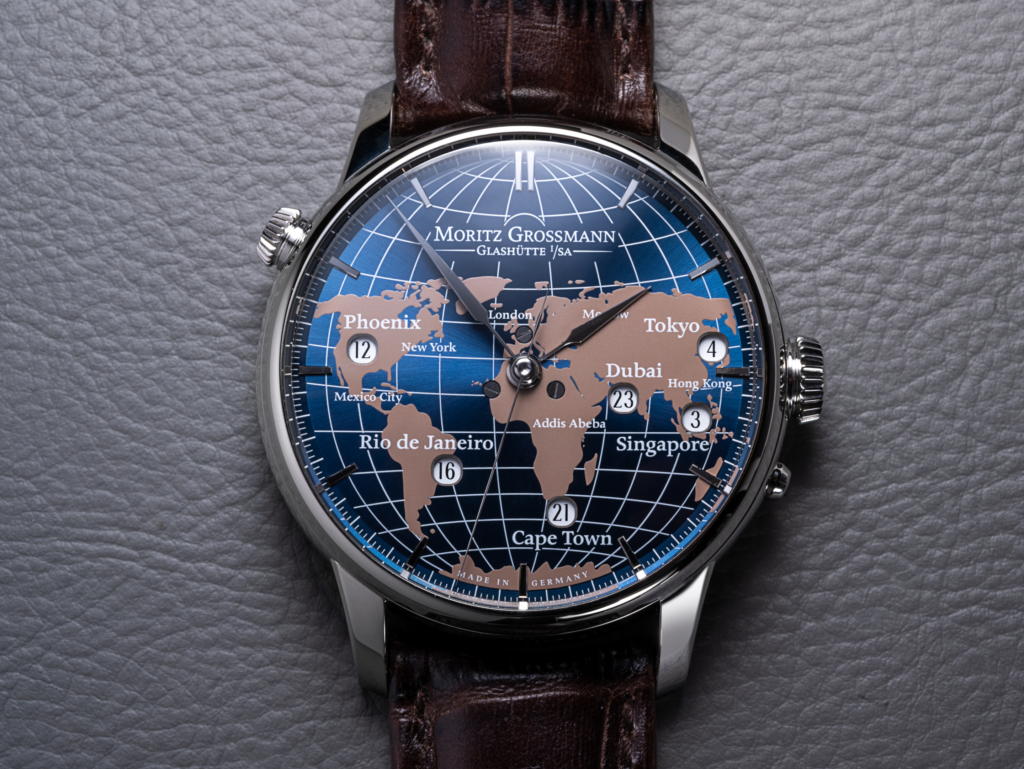 Exquisite dial design in the shape of a world map

The exquisitely crafted dial of the UNIVERSALZEIT indicates the time to the minute all around the globe. Featuring oceans, continents, longitude and latitude, the ensemble of time windows and the hour, minute and second hands all come together to create a well-ordered layout in a classically elegant design.

The galvanised base of the dial is finished with a high-quality sunray finish. This type of finish lends the dial a luminous blue tone that makes it glow and symbolises the water of the oceans. The salmon-coloured continents come to the fore to form a subtle contrast. The filigree network of longitude and latitude encircles the globe in a pale shade of white. The rhodium-plated bevels of the windows open up a glimpse of the hours. To ensure the best readability, the numerals have been kept in black on a white lacquered background. Set slightly lower, the minute scale encircles the globe, affording it an aesthetic backdrop and structure.

Painstakingly flat polished, the lance-shaped hour and minute hands and steel hour indices are manually crafted in the manufactory. Slender and domed, the second hand moves smoothly around its axis in the centre of the dial to create an eye-catching feature. The stainless steel case provides the perfect frame for the UNIVERSALZEIT with its 44.5 mm diameter. 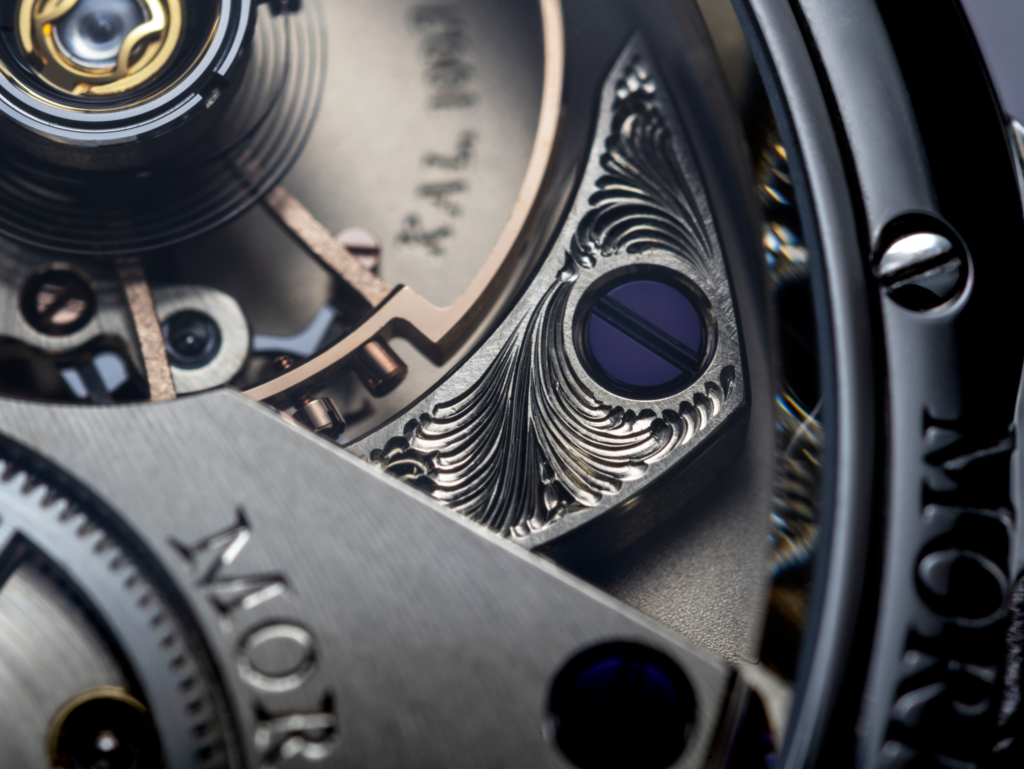 The new calibre 100.7 of the UNIVERSALZEIT was specially developed by Grossmann’s designers in the manufactory.

A disc connected to a 24-tooth ratchet wheel moves beneath the dial. This is printed with a multitude of numerals from 1 to 24, each arranged at an angle of 15 degrees across a total of six rings.

When the minute hand moves over the 12, the ratchet wheel and with it the disc move forward by one position. The disc is precisely positioned by a ratchet spring. Thanks to the optimal alignment of the numerals on the disc, the hours are aligned horizontally in the windows, making it easy for the wearer to read them.

When setting the watch, the time in the time windows must be adjusted in advance. Knowing the current time zone for one location is sufficient for this. The time in the other windows is automatically synchronised when it is set.

The main time hour hand is then corrected via the pusher mechanism at 10 o’clock.

The hour hand of the main time can be moved backwards and forwards separately in hourly increments using the quick adjustment mechanism. This does not change the time display in the windows. The mechanism allows the operator to engage the crown in two positions at 10 o’clock and then use a pusher function to correct the hour hand independently of the disc. In the middle position, a stop prevents the pusher from being operated. This prevents accidental adjustment of the time.

Superb finishing from the house of Moritz Grossmann

The calibre 100.7 is testimony to the consummate craftsmanship and ultimate in finishing from the house of Moritz Grossmann.

The sophisticated design of the pillar movement is complemented by the intricate workmanship seen in every component, which are all finished by hand. The floral pattern on the balance and escape-wheel cock is engraved by hand, as is the lettering on the wheel bridge. Traditional cuts and polishes have been applied to the surfaces of other parts.

Further evidence of the highest standards of German craftsmanship can be seen on the ratchet wheel with its three-band snailing, framed by broad chamfers polished to a high gloss sheen. 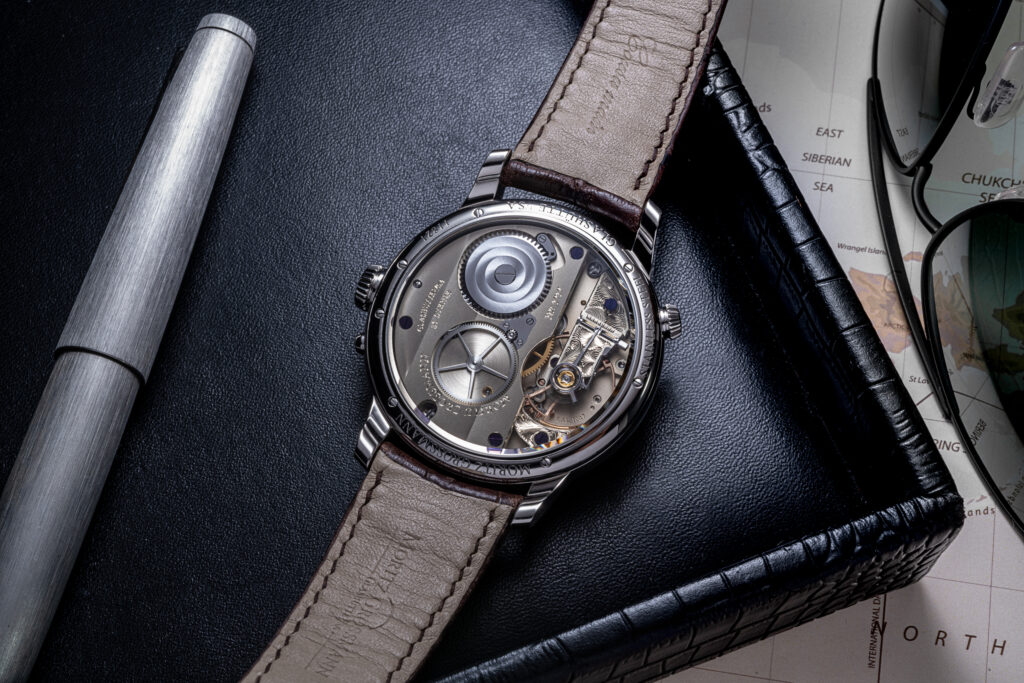 The UNIVERSALZEIT’s elaborate manufacture movement is given an appropriate setting by a stainless steel case with a brown, hand-stitched alligator leather strap.

“We are excited to debut the UNIVERSALZEIT, our first novelty of 2022, together with Sincere Fine Watches in Singapore. Sincere has the expertise in sharing with customers the passion and knowledge of watches, especially for independent brands such as ours. We are pleased to grow the visibility and awareness of Moritz Grossmann through Sincere’s well established retail network. Singapore is without a doubt an important market for us, and we are honoured to debut the UNIVERSALZEIT here. We would like to invite customers worldwide to experience, appreciate, and understand more about this unique model first hand.” — Christine Hutter, Founder and CEO, Moritz Grossmann

The UNIVERSALZEIT is priced at SGD 76,500 (including taxes) and will be first showcased in Singapore by Sincere Fine Watches at Takashimaya S.C., unit 01-12 from 23 February to 23 March 2022. Register your interest here or visit us to discover more.