Titanium and Blue, a new chapter for the Greubel Forsey GMT Quadruple Tourbillon

Greubel Forsey writes the second and reveals an 11 piece edition of this groundbreaking timepiece in Titanium. With new materials, new colours, and new finishes, this revolutionary and modern limited edition launches the GMT Quadruple Tourbillon towards unexplored horizons and resolutely marks the dawn of a new chapter.

The Greubel Forsey GMT Quadruple Tourbillon is radical in all its aspects. First of all, by its construction. The Quadruple Tourbillon is Greubel Forsey’s second Fundamental Invention, The mission: to average out positional errors due to gravity in all situations, especially in stable wristwatch positions. To achieve this, the original tourbillon has been elevated to realise its full potential: inclined at 30°, doubled and then quadrupled. The result, two synchronised Double Tourbillon 30° mechanisms, where a first cage, inclined at 30° and rotating in one minute, is nested within a second horizontal cage, completing a full rotation in four minutes. A spherical differential transmits the average timing rate of the four tourbillon cages, improving the overall chronometric performance of all the regulating organs. 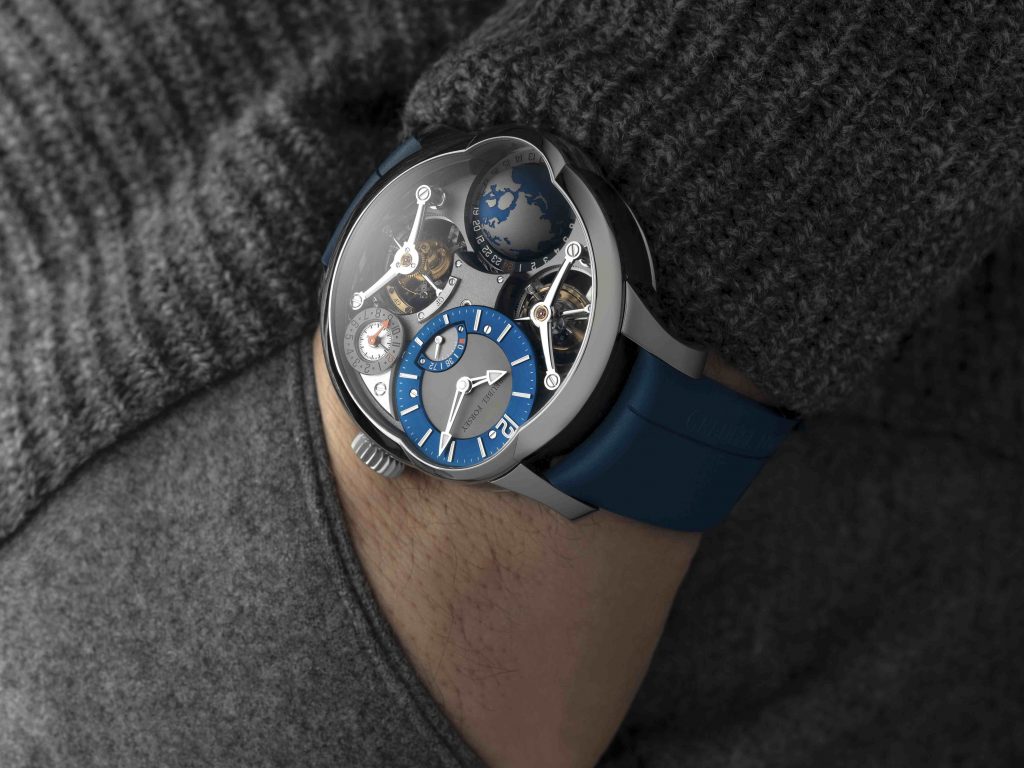 A totally new experience on the wrist

The GMT Quadruple Tourbillon is radical by design. With this exclusive limited edition in titanium with striking blue accents, Greubel Forsey offers an unexpected alternative to the precious metals that High-end watchmaking traditionally favours. Titanium has numerous qualities: it is both stronger and lighter than steel, while also being extremely resistant to corrosion and magnetic fields. With a reduction of over a third of its weight, the new titanium case offers a brand new, modern and dynamic feel on the wrist, which has inspired the choice of the new rubber strap, in order to assert this new contemporary identity. 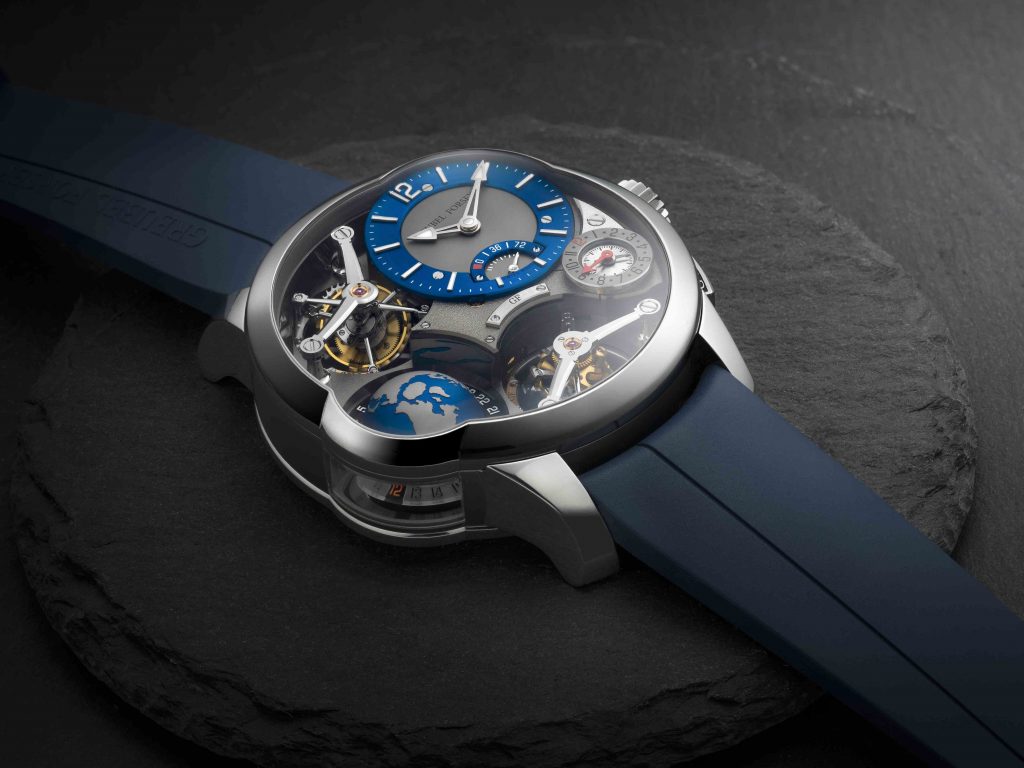 The toughness of titanium, which defines the 46.5 mm case of the GMT Quadruple Tourbillon, presents a significant machining and hand-finishing challenge for the components made from it, such as the GMT pusher or the folding clasp or the crown. In addition, new hand finishing details have been specially created for this timepiece. The circular-grained hour ring with polished bevels and 72-hour chronometric power reserve indication appears for the first time in a brilliant blue. The mainplate is now frosted and spotted with polished bevelling, countersinks, and straight-grained flanks, executed in a grey finish. 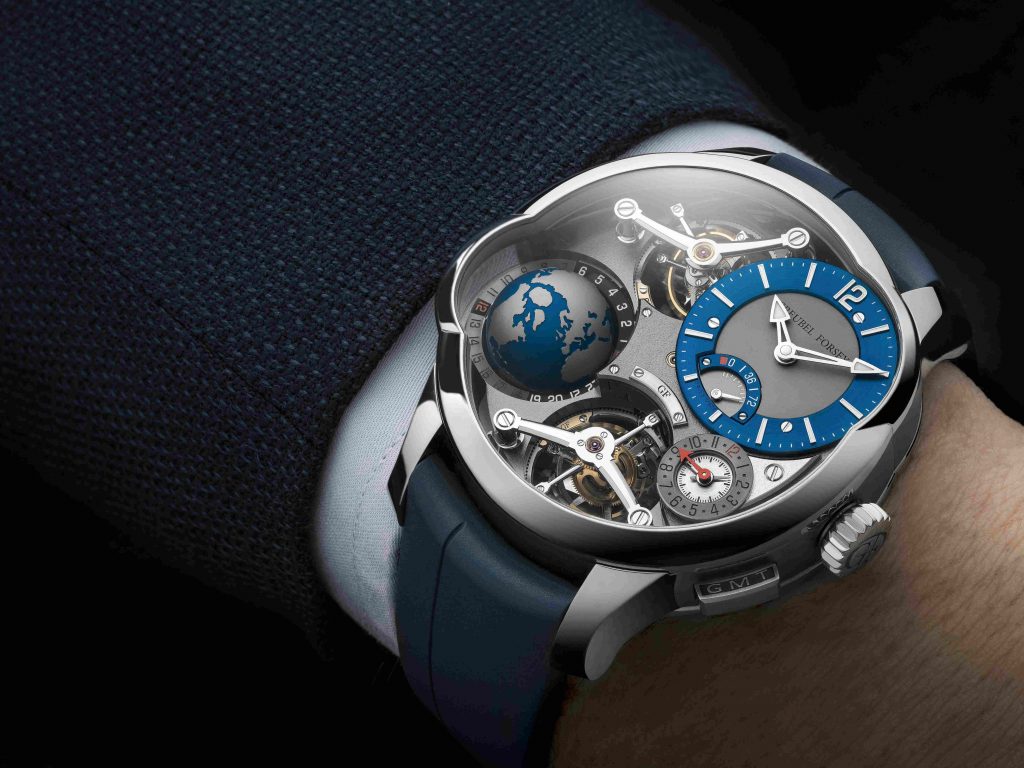 Between Earth and Sea

Planet Earth, set near eight o’clock, shines in a new light with the blue livery. An original Greubel Forsey creation from ten years ago (2011), the rotating terrestrial globe allows for the simultaneous display of several different time zones: on the dial side, with a 24-hour ring around the Earth, for Day/Night indication, and on the caseback side, displaying 24 major cities their respective time zones while distinguishing between those which use summer time (on a light coloured backdrop), and those which do not (on a dark backdrop). The sapphire crystal window around the equator completes the timepiece, offering a complete view of the Earth in motion, with its continents immersed in the deep blue ocean waters, complementing the exquisite blue finish of the power reserve, hour circle and strap.