A City on the Wrist: Sincere Fine Watches Premieres the New Greubel Forsey Architecture in Singapore

Never before has Greubel Forsey taken the technical and aesthetic integration of one of its timepieces as far as it has with the Tourbillon 24 Secondes Architecture. 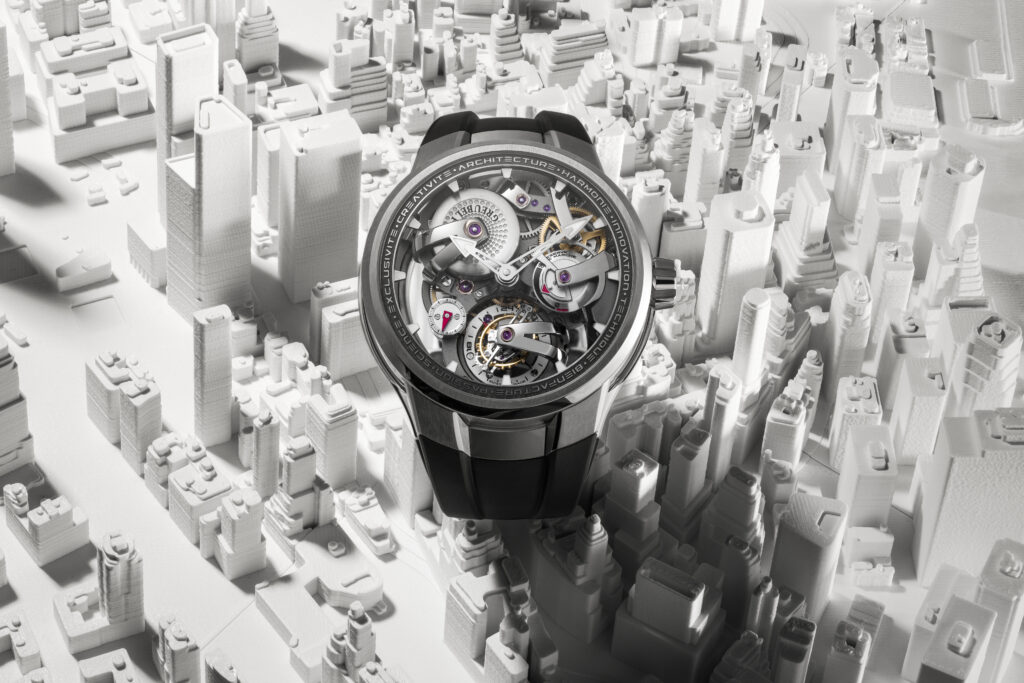 The Tourbillon 24 Secondes Architecture is unlike any Greubel Forsey timepiece ever created. Its case is wholly atypical, its construction purposeful, its components sculptural, their mechanical interplay kinetic and the movement – simply spectacular! This new Greubel Forsey calibre within a new convex conical frustrum case shape represents a complete departure from traditional movement construction and aesthetics and bring an architectural experience to the wrist. 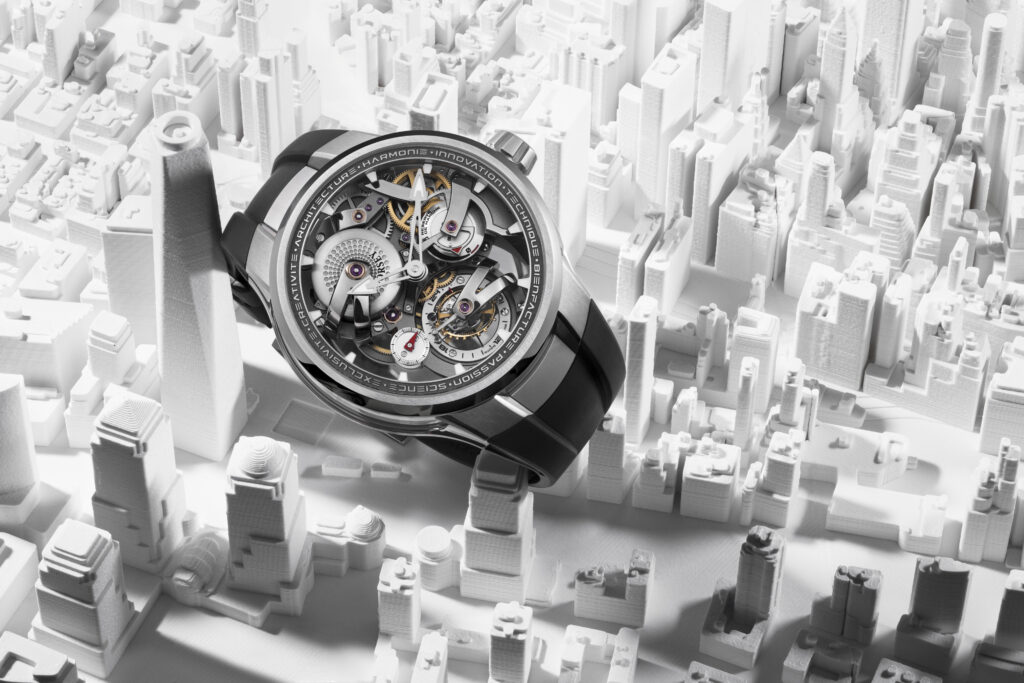 History is made of continuous progress and, at times, clear ruptures. Fine Watchmaking is no exception, with 250 years of patiently accumulated achievements and, from time to time, breaches, upheavals or revolutions.

Greubel Forsey initiated some of them with the Double Tourbillon 30°, the Quadruple Tourbillon. the Double Balancier and the Mechanical Computer of the QP à Équation, to name just a few. From an aesthetic point of view, its asymmetrical and convex case shapes, or its inclined escapements have opened up new paths in watchmaking design. 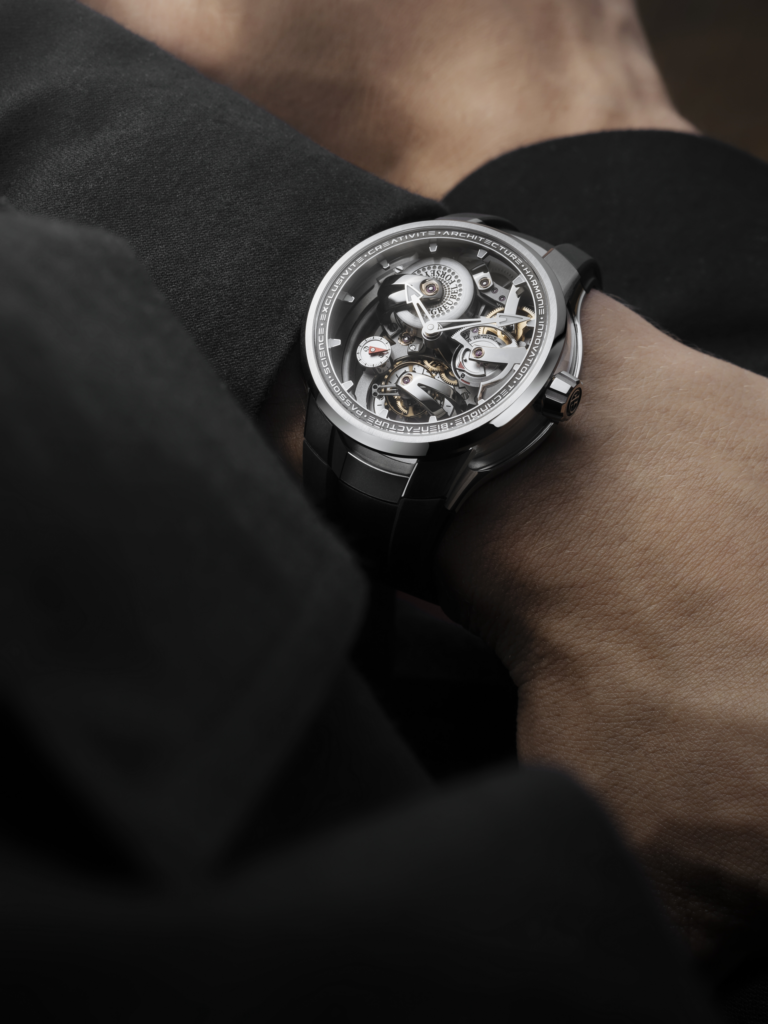 The new Tourbillon 24 Secondes Architecture is not easy to apprehend. Its components are suspended in space, revealing a harmonious composition of surfaces, shapes and movements. The case showcases the spectacle within firstly through the large opening on the dial side, encompassed by relief-engraved Greubel Forsey values that inspired this creation: Architecture, Harmonie, Innovation, Technique, Bienfacture, Passion, Science, Exclusivité, Créativité.

While the case looks perfectly round when observed from the dial side, it reveals its convex shape from other angles, along with its large synthetic sapphire crystal ring which envelopes the entire periphery of the caseband. Greubel Forsey has been integrating lateral sapphire crystal apertures since as early as 2007, but has never before rendered a movement visible from above, below, and from every angle around the caseband.

This new case construction enables an exhaustive look at even the smallest detail of the movement, but also allows light to penetrate almost unhindered. It is light which sculpts matter and reveals architecture in its intimacy, through a play of shadows and reflections. It bathes the movement to reveal it fully and in all of its complexity and is thus itself a vital contribution to the aesthetic of this exclusive timepiece. 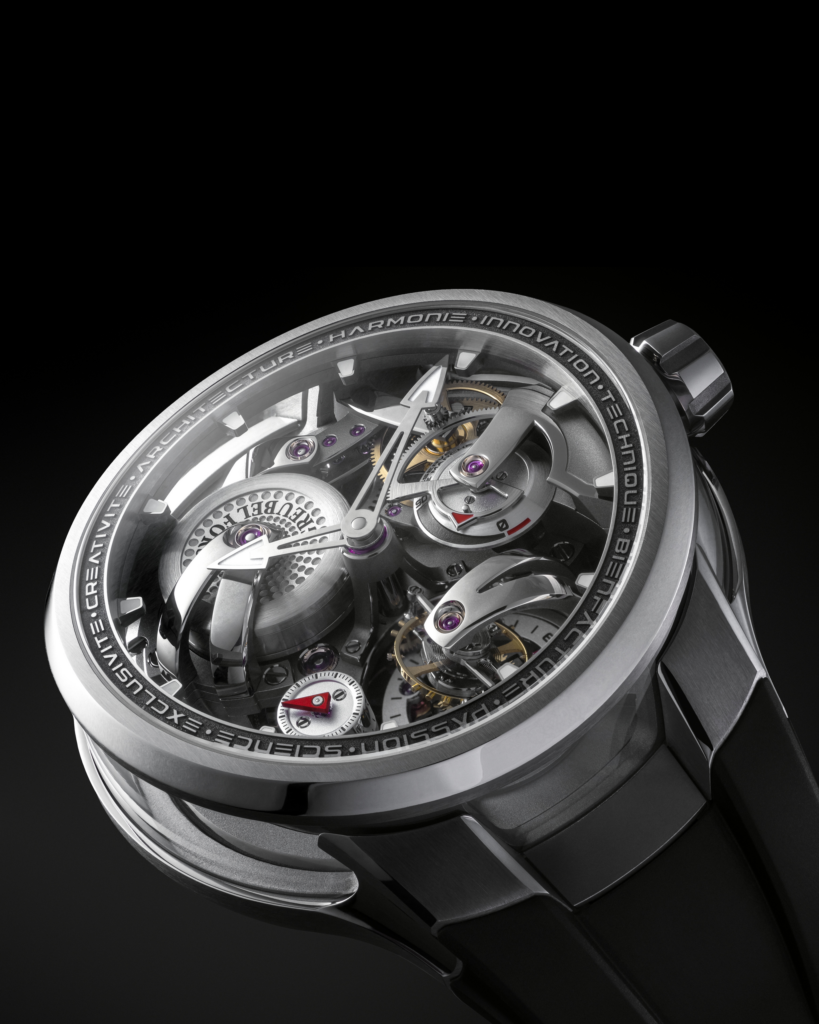 In addition to its aesthetic contribution in showcasing the movement, the case offers a very unique experience on the wrist. Its convex shape profile ensures optimal ergonomics and wrist comfort. Pushing the envelope further still, Greubel Forsey has now conceived a case which is not only convex but also resembles a conical frustrum in its geometry. In the Tourbillon 24 Secondes Architecture, the diameter around the caseback (47.05mm) is wider than it is around the bezel (45mm), thus combining the best of two worlds: it contains enough volume to fully showcase the movement architecture within, while at the same time giving the impression of being significantly smaller than it actually is.

A Movement Unlike Any Other

While the case represents a significant technical feat in its own right, the Greubel Forsey movement remains the star of the show. The polished titanium bridges immediately stand out from the frosted finish of the mainplate, and spectacularly so: Emerging seemingly out of nowhere, they wind their way through the movement to finally impose themselves flush with the sapphire crystal.

At 6 o’clock, the Tourbillon 24 Secondes is moored from a large spherical and openworked bridge, whose base remains hidden by design. In its form, the inclined escapement defies gravity, while in its function, it compensates for it. To solve the problem of critical positions of the oscillator in relation to gravity, the Tourbillon 24 Secondes uses a fast rotation speed in addition to a 25° inclination. These two elements combined contribute to excellent chronometric performance, especially in stable positions. 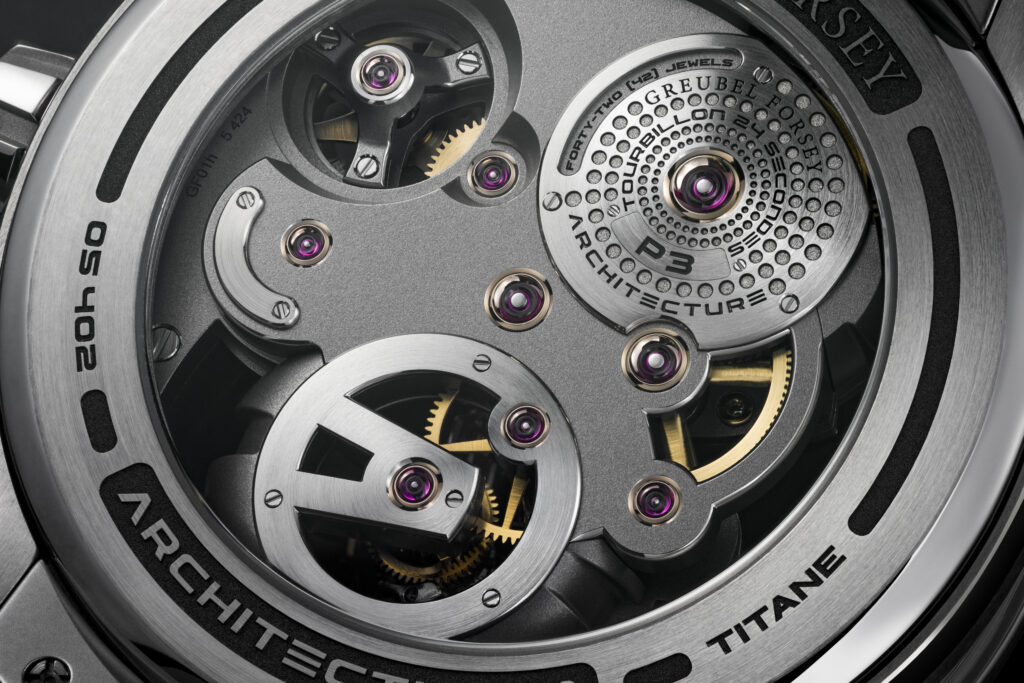 The barrel bridge at 10 o’clock is sculpted similarly, with polished spherical surfaces, along with polished beveling and countersinks. The barrel cover is engraved, lacquered and circular-grained and contains three coaxial series-coupled fast-rotating barrels, one of which is equipped with a slipping spring to avoid excess tension. The caliber’s energy source provides 90 hours chronometric power reserve, indicated by a moving red triangle over a conical disk at 3 o’clock. It too is held in place by a beautiful polished titanium bridge.

In the centre, we find two large curved, openworked and polished steel hands, indicating the hours and minutes, mounted on a signature Greubel Forsey tripod bridge. The time indication is completed at 8 o’clock by a small second on a cylinder with polished flanks – mirroring and echoing every other components in its vicinity.

An Exclusive Fusion of Technicity and Aesthetics

The 354 parts of the movement are sculpted and arranged asymmetrically yet harmoniously, almost as if they had issued from an organic growth process found in the natural world. Each component is suspended in an unexpected three-dimensional plane, yet it is exactly where it should be aesthetically, technically in relation to every other component. The movement is vibrant and urban, yet it has space to breathe. The Tourbillon 24 Secondes Architecture is a marvel of contemporary design and a physical manifestation of the Greubel Forsey Art of Invention.

The Tourbillon 24 Secondes Architecture will be limited to only 11 pieces in 2022, and 18 pieces a year between 2023 and 2025, for a total of 65 exclusive timepieces overall. Register your interest here or visit us to discover more.